Sony have made a splash with their first credible video DSLR, the NEX 5N. In my view I still prefer the GH2’s image – Panasonic knocked the image processing into a different league for a DSLR on that and the hack furthers it – but the 5N has a very good sensor and a new processor. Out of the box it looks very electronic though. Here’s how to tune it.

There are two picture profiles that I use on the 5N (which Sony dub Creative Styles). Sunset and Portrait.

Picture profiles make a big difference to the image on a DSLR, we are not just tinkering around the edges here. The settings determine your final result to a much larger degree than if shooting RAW stills. Set sharpness too high for example and that hard digital look is very difficult to get rid of in post. Get white balance wrong and there’s only so much you can tweak that afterwards. Another reason why picture profiles have a large effect on DSLRs is that most current models aside from the GH2 don’t have perfect scalers and image processors that deal with those megapixel rich sensors – so an optimised picture profile can help reduce the severity of scaling artefacts.

When I want to flatten the image like CineStyle and give shadow detail a boost I use Portrait and when I’m shooting scenes with a lot of smooth gradated tones (skies and skin) I shoot with Sunset.

For most I recommend Portrait as the default setting. Sunset is a little bit tricker because you need to set white balance manually with it. If you don’t the picture profile sets auto white balance way too warm.

Now the LCDs on the GH2 and 5N are pretty poor for guaging colour temperature and exposure. Both switch their colour space configuration when you hit record, both give a slightly misleading live view as well. The gamma switch when you hit record doesn’t happen on Canon DSLRs. The 5N and GH2 do it via HDMI as well so an EVF or monitor doesn’t really help but one will give you a much better idea of white balance. The 5N’s screen is very cool in temperature itself and the recorded AVCHD is always warmer looking if you gauge temperature by the LCD. Something to look for on the 5N’s LCD if you use it is your greens go brownish when you’ve pushed the manual white balance too warm.

So if you don’t want all that hassle use Portrait and auto white balance, or a preset.

Now Portrait already has the flattest image on the 5N which is good for grading, but I like to push it further and turn Contrast down as far as it will go to -3. This gives you more dynamic range and it prevents highlights from blowing so easily. Next I like to turn Sharpness down as far as it will go, again -3. The 5N resolves more detail than a Canon but not with the same cleanness as the GH2 so to help with aliasing and over-sharpened high contrast edges and highlights turn this all the way down.

The next thing to do is turn OFF screen brightness from Auto. Set it manually and set it as high as it will go. You will get slightly less battery performance but it is worth it. Otherwise the screen adjusts itself according to ambient light and this is REALLY confusing as far as manual exposure in video mode goes, it even adjusts itself mid-recording sometimes.

Last tip is really a usability thing – I have set the main soft key in the middle of the dial to Custom and assigned a set of custom functions to the sub-menu. This is like the Quick Menu on the GH2 and 7D. I have the Creative Style picture profiles in here for quick adjustment rather than having to go into the Brightness / Color menu in the main menu. I also have white balance (WB) and focus mode in here. I’ve assigned ISO to the right key on the d-pad under the dial (the dial doubles as a 4-way directional d-pad).

Both LCD brightness and custom keys are configured in the Setup part of the main menu.

Something I am experimenting with on the GH2 at the moment is to increase noise reduction to maximum. The sharpness is still too high really with the picture profile on minimum, so extra noise reduction helps soften the image so it looks more organic especially at high ISOs. Nothing conclusive or final since I’ve not shot with it quite enough but early results do seem to get a more cinematic image and less harsh electronic looking detail.

On the 5N I go the other way and set noise reduction to minimum and even then it is a bit on the strong side at high ISOs. 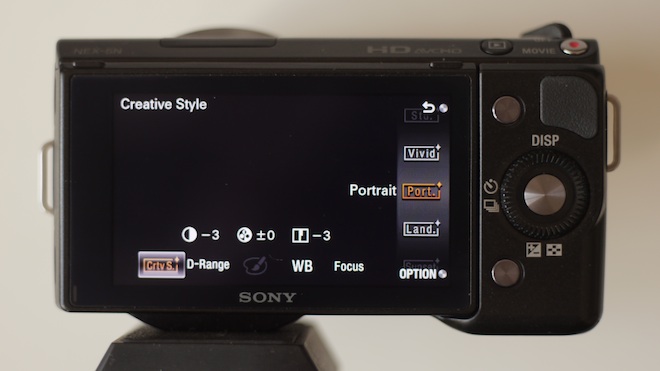 Portrait (Settings from left to right on screen)