Here is EOSHD’s latest video, which was shot entirely on the GH1.

It tells a tale of 2 sides to an island in the Philippines. Two beaches, within 100m of each other.

The island is popular with tourists as a luxury holiday destination on one side, whilst old-world-style poverty stricken on the other.

I wanted all along to set this video to Pink Floyd’s Wish You Were Here. The sound you might here during the intro as the first guitar begins is Dave Gilmour coughing. Shortly afterwards he gave up smoking.

The contrast between rich and poor on this island is incredible. It retains a lot of it’s culture, but it’s gradually being replaced bit-by-bit with tourism, an industry powered frantically by the need of locals to survive and make as much money as possible. They value even the smallest material posession. When you have known poverty, it’s understandable. I rented a scooter one day on the island and returned it promptly at the arranged time. Later, a man came to find me because I had not also handed in the island tourist map I’d borrowed!! I found an identical one at a bank, and he was happy to accept it thinking it was the original.

Life on Boracay has darker undertones. The family half way through the video with snacks hanging on the wall, the young girl with a baby in her arms told me how proud they were of their new-born daughter. That the 13 or 14 year old girl’s daughter was the product of a short relationship with a white American pedophile didn’t seem to matter. Shockingly, it is normal for young girls to have babies at that age, and this being a poor society – that it was a comparatively rich man that gave it her, is a cause for celebration.

On an island as tropical and as beautiful as Boracay, tourism is an easy sell to the internationals who flock there, hard sold by Filipinos who have never known such modernisation and progress ever before in their lives.

But another transformation is taking hold which can be seen all over the world and not just in Boracay. As the old world dies and modernity takes over, the poor become enslaved and excluded by the rich.

Well – that’s the message I wanted to get across with my video anyway. I hope you enjoy it and see other messages hidden deep in the footage, and the people of Boracay.

I had a vari-ND filter of the el-cheapo variety with me but unfortunately on the first day I forgot to bring it with me! It doesn’t improve depth of field very much when it’s sat in a hotel room by itself, which is probably just as well because in an effort to set up shots quickly before I missed them, I relied somewhat on just the kit lens and it’s auto-focus. You can see on the shots of the kids against the fence early on, and the portraits of the workers in the first half of the video, that the camera has inexplicably shifted focus to the backdrop whilst recording. Having a one-press AF at the start of the shot is useful, but not if the live recording AF messes it up afterwards!! I recommend using manual focus, or a combination of one-shot AF and either locking AF before hitting record, or turning off continuous auto-focus in video mode. If you’re shooting people, who are not bang in the middle of the frame, I recommend using the face detection mode for AF as it might avoid these rather silly problems I had. I didn’t notice them while recording though, because due to the intensity of the sunlight I had the kit lens at F22!! That is why you NEED a vari-ND filter for this kind of bright day light shooting. Compensating with a faster shutter speed instead ruins the motion and motion blur of 24p video.

The night falls at the end of the video and the ND is thrown back in it’s hotel room. The GH1 revels in such situations, as do I. It really is a cinematic camera at fast apertures. On a Micro 4/3rds sensor at F4 your lens isn’t really delivering very much shallow depth of field, even at longer focal lengths. But at F1.4 or F1.7 everything changes and your GH1 looks a lot more competitive against the 5DMkII in terms of lovely shallow depth of field. The lens I used at night was a Contax Yashica mount Zeiss 85MM F1.4 AE.

I still think where the GH1 is weak is when there is a bright daylight scene with foliage and a lot of detail, with deep depth of field. The codec reduces the overall detail, and you can’t move the camera much because the codec breaks up even worse. But I also feel this problem is not as bad as earlier GH1 hardware revisions, they have improved things on the newer models. Secondly, not using the procesor intensive kit lens with it’s electronic image corrections for distortion and chromatic aberrations improves matters further. But as a gazillion GH1 users have already pointed out to Panasonic, we really DO need a better codec next time out thank you Panasonic. It’s not an issue for shallow depth of field shots though.

My girlfriend had a GF1 with her on this holiday, which I found had a screen which was easier to view in bright sunlight than the one on the GH1. One for the GH2 for sure!

A few other observations – I really like having a tripod with horizontal tilt as well as vertical. It saves so much time having to reposition the legs on a uneven surface. Whilst many pros shun tripods and use expensive stabilising rigs at eye-level, my style still relies on a perfectly still frame a lot of the time. The tripod I used here is a generic no-brander from China, it isn’t very well built and the fluid head mechanisms whilst very smooth, have an uneven friction throughout the range of travel. But for the money I got it for (£40) it really is an amazingly featured tripod!! Sadly, I have no idea who makes it or indeed who sells it internationally.

You’ll notice the small Lowepro bag hung on the bottom of the tripod. That contained the GH1, it’s kit lens, plus a 20mm F1.7 pancake in the side pocket and a 85MM F1.4 zeiss. Yes, it really is a full indie film making kit in a bag the size of a tissue box!! Such is the advantage of the GH1 hey. 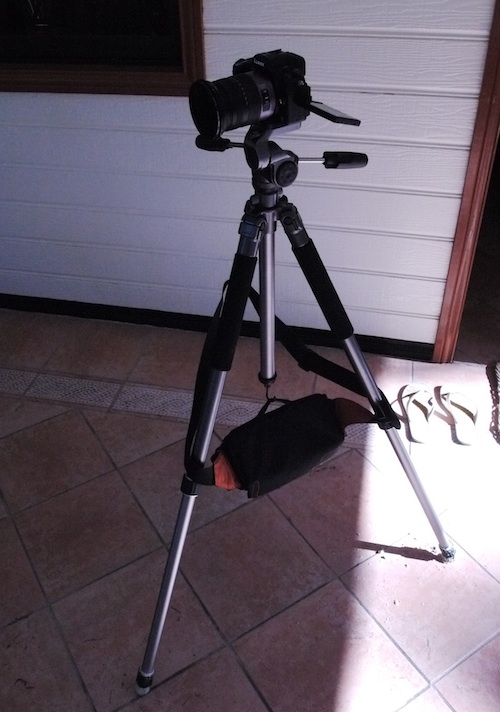