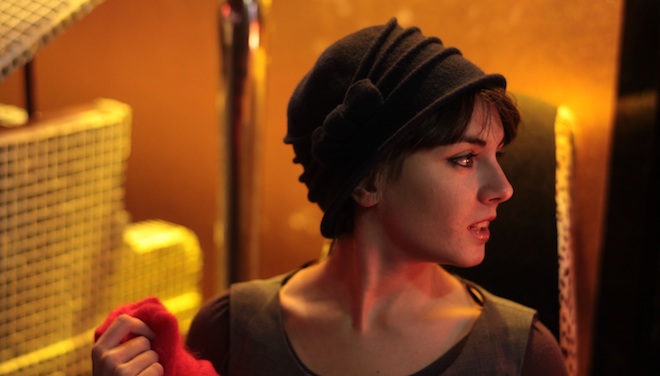 This is the first in a new series of articles dispelling current ‘trends, myths and sacred cows’ in digital video.

Currently it’s trendy to tune cameras for more dynamic range. We have CineStyle for DSLRs, HDRx for RED and S-Log for the Sony F3… the list goes on. I feel the technique has overtaken the artist, the gimmick has triumphed over substance and we are operating in a world of myths and plastic looking images.

High dynamic range (HDR) is being used as a ‘magic bullet’ when it should be used dispassionately. It doesn’t make every image better. It’s a relevant tool when used appropriately, as naturally as possible. Many people are not asking the right questions of the new tech and their shoots suffers as a result. Do we always want to hold onto highlights? The key question should be “are they nice to look at or better to let them blow out?”

Here’s an example of a standard dynamic range image with highlight detail that’s poorly handled by the camera. The detail the Nikon D7000 holds onto in the bright window is ugly and heavily compromised, with hard edges and not the gentle roll off of film. Look at the leafs on the tree, they look like they’ve been cut around with a Photoshop lasso. If this shot wasn’t from a test to show exactly that (the great Zacuto Shootout 2011), they’d have exposed and lit the scene very differently of course. 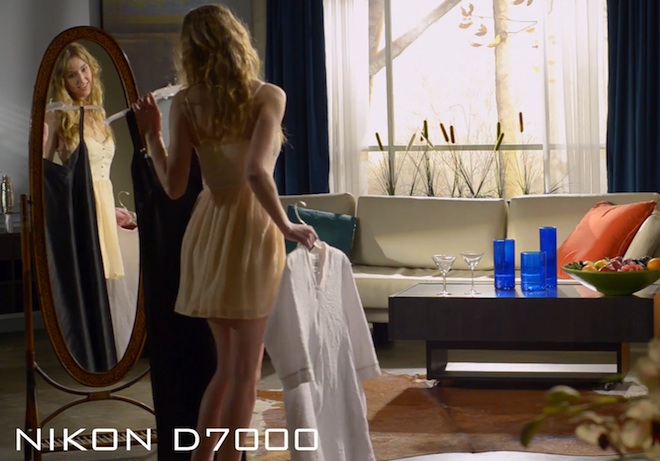 Rather than changing the all important light in a scene, HDR tries to ‘fix’ this and is ‘easy’.

It has become an ‘art form’ in itself for some. I call it art for the blind!

But extreme HDR has serious side effects in that it sacrifices tonal range and contrast, flattening the image by bringing up darker tones and lowering highlight tones, so that the range of tones is compressed into a narrow middle-band.

All that you are left with are mid-tones and a garish variety of disparately different colours. It looks really odd, like a plastic toy or computer game. The subtle gradation between light and dark is lost, contrast reduced – especially in video footage on DSLRs since they have a limited 8bit (and compressed) tonal range to begin with.

Here is an example of an image with limited dynamic range but high tonal range and smooth transitions (containing many steps) from highlights to dark areas. The dark areas are actually dark, unlike with HDR footage. Highlights are allowed to blow out to white and shadows are crushed to black on the beach sands. The gradient on the left is a further example of high tonality. 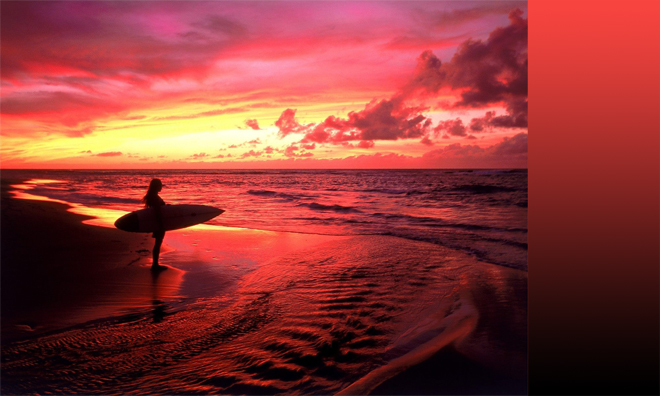 You may say that the image is underexposed and that you can’t see the detail of the surfer’s body or the sand on the beach. Indeed it is underexposed and that is the whole point of the image and why it works. Anything else would have ruined it visually. Bringing up the shadows, or boosting mids, or increasing the detail in the highlights – all would distract you from the natural beauty of the image caused by how the light falls on the scene.

Sometimes it is best not to fiddle with something in post at all.

Below are a selection of HDR sunsets and the resulting low tonal range. These take the natural lighting, shadows and the way the light falls on the scenery and completely screws it around. What is the point?

Again I have added a colour gradient to show what the predominant tones are in the image (nothing scientific just based on my own eye).

Here we have the usual muddy yellows, greens and blues of HDR ‘sick’ but the scarlet oranges, deep reds and inky blacks have vanished – where have they gone? Everything is a mid-tone – yellow or blue. 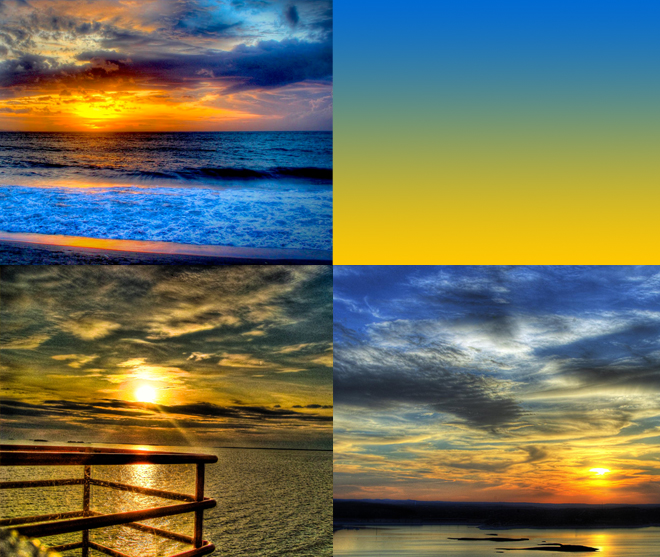 Exposing is critical. A good example is ‘magic hour’ – when the sun is setting. A famous example is Terrance Malick and recently Tree of Life.

I like to underexpose in these situations because it mimics what I see with my own eye and it makes best use of the best parts of the dusk light.

Letting all that beautiful scarlet and orange blow to a milky yellow doesn’t appeal to me, so I underexpose. If I took the HDR route though, I’d have no variation in skin tones, shadows wouldn’t look like magic hour and the highlights would be flat rather than rich and glowing like in real life. All the rich tonality would be compressed and squashed into the middle.

The professional purpose of HDR should not be as an artistic statement – it’s actually just one of many techniques to correct exposure mistakes and to have more tuning options in post for shadow and highlight detail.

When you actually have an HDR image ‘as is’ the excess of dynamic range almost always looks terrible – be it a finished tone mapped result or CineStyle straight out of camera, it is not how our eyes see. Contrast and tonality are critical parts of human vision and HDR flattens both.

It’s like music with too much mid-tone and not enough bass or treble.

If your blacks are not black but grey, your shadows not shadows and your highlights never ‘high’ so you end up with mud.

The other problem with HDR is that in the case of DSLRs, compressed 8bit codecs just aren’t good enough to hold so much information without compromising other much more important aspects of the image.

One problem I have is the nasty highlights of digital motion cameras. Sony cameras (like the EX3) have a facility called ‘knee’ to hold onto highlights. The trouble I guess is that holding highlights means flattening the image. And flattening the image lowers contrast in portions of the scene. At some point colour contrast becomes low enough that changes in colour are not resolved in the 8 bit colour space. This represents as a lack of tonality or colour banding or blotches.

Indeed. The biggest weakness with DSLRs is certainly not their dynamic range.

According to the Zacuto Shootout 2011, the latitude of a DSLR is close to a much more expensive Sony F3 and even the Sony CineAlta F35!! It is only the Alexa and 35mm film which is meaningfully more advanced in the dynamic range stakes.

We’ve never had such good dynamic range out of the box from a consumer video / stills camera. 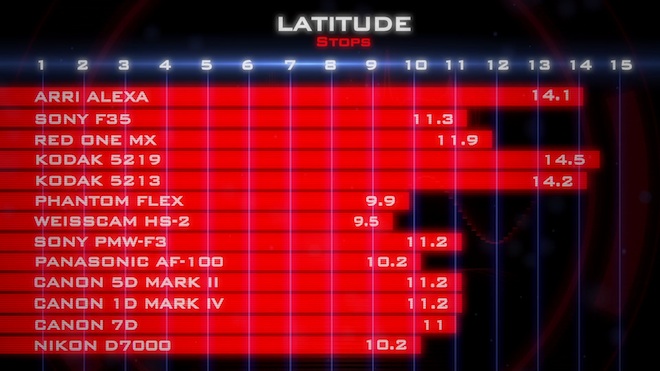 In fact when you consider the sensor in a 5D Mark II and how much more dynamic range it has in raw stills mode, or the GH2’s more advanced video mode – the consumer CMOS sensor technology in these cameras unequivocally have enough dynamic range for feature film production relative to 35mm film or the Alexa.

HDR when done well and subtly (say to protect highlights) it’s a valid technique but when it goes extreme like on the sunsets above, it really is just a gimmick.

The main area of improvement is not dynamic range but the compression and the 8bit colour space on DSLR codecs. The fewer tones available mean that roll off to highlights can look much more ‘digital’ than film or the Alexa so we should be tuning our picture profiles for tonality and not for dynamic range to compensate for this much more significant weakness.

To demonstrate this, here is a very extreme and unscientific example of what 8bit colour does to your image. Compare and contrast! 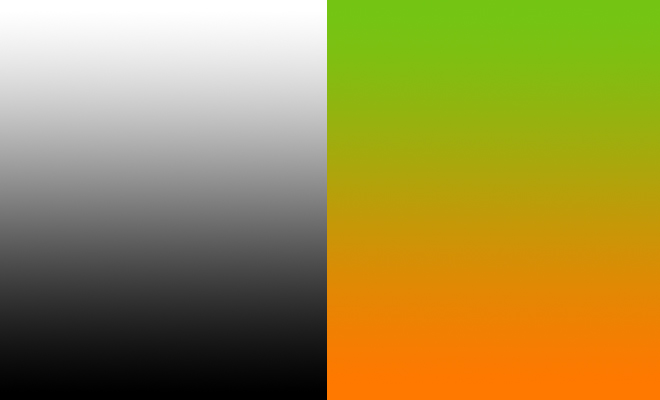 Note the rich tones in this image go all the way from completely black to bright white and not grey to grey!

Green to orange is there to demonstrate purely what a bloody ugly combination of colours they are! As you see in so much HDR stuff, they are predominant. 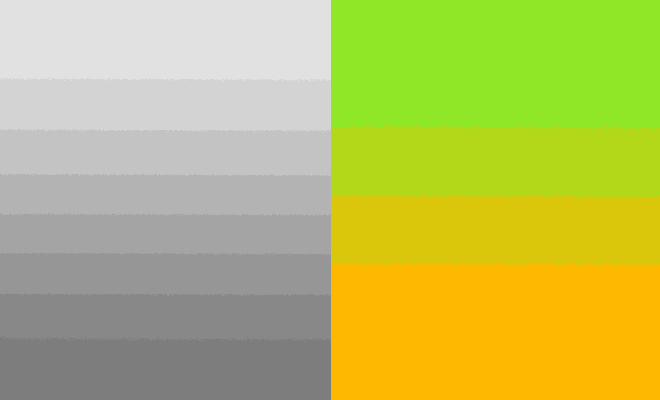 Sometimes it is best to sacrifice a bit of dynamic range for contrast. For this I recommend the Dynamic picture profile on the GH2 and the Faithful picture profile on Canon DSLRs. Indeed you won’t have as much dynamic range and shadow detail to play with, but instead concentrate on the original exposure, lighting and actually making beautiful images rather than too much of the electronic / post science behind it.

Sam Morgan Moore sums it up rather nicely I think!

Best performance from a camera will be by keeping a low dynamic range profile and controlling light.
Yep – that means grad ND on the sky and lighting and reflectors… it’s called cinematography! 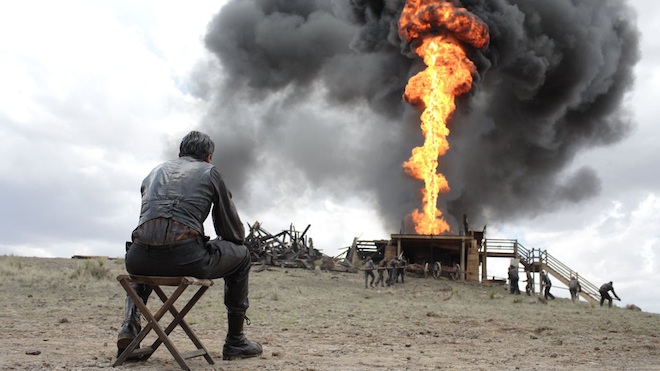