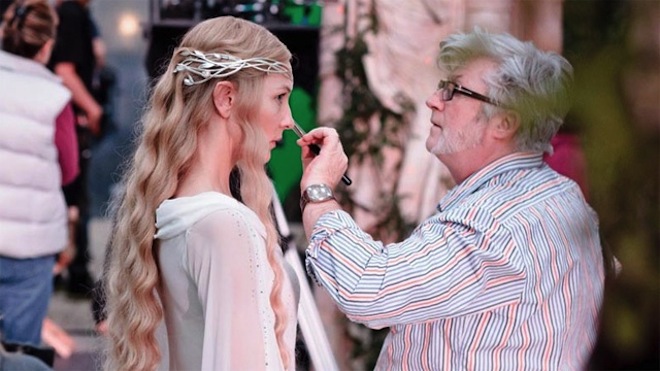 Above: Cate Blanchett receives some all-too-real makeup on the set of The Hobbit

Peter Jackson shot The Hobbit: An Unexpected Journey at 48 frames per second (HFR) in 3D. So what is the verdict on HFR technology… More immersive? Helps the story? More beautiful?

The Hobbit looks like Teletubbies and is way too long. It’s fully possible that this technology will one day develop into a tool that enriches our experience of movies. If so, I suspect The Hobbit will be remembered as an early, failed experiment in the medium. The best way I can think to describe the quality of the 48fps image in The Hobbit is this: It looks like an ’80s-era home video shot by someone who happened to be standing around on set while The Hobbit was being filmed. The effect is curiously washed out and flat, yet unforgiving in its hyper-realism: Any imperfection or note of artifice in the costumes or sets stands out as if illuminated with a bank of fluorescent bulbs. This wildly expensive visual technology paradoxically conspires to make everything else in the film look cheap. I found myself fixating, for example, on Gandalf’s staff, an elegant Art Nouveau-esque creation that, in the earlier Lord of the Rings films, would have blended in as another part of the richly detailed ambient whimsy. Seen at 48fps, the staff looked like a cast-resin prop you might order online from a Wiccan supply house.

It looks uncomfortably like telly, albeit telly shot with impossibly high production values and in immersive 3D. Before you grow accustomed to this, it feels as if there has been a terrible mistake in the projection room and they are showing us the video location report from the DVD “making of” featurette, rather than the actual film.

It’s the technical innovations here that will really leave you breathless – notably the stunning 3D shot at 48 frames per second (creating a smoother ride than the usual 24fps). The set-pieces – notably the group’s encounter with the Great Goblin and his hoards – are astounding, showing Jackson hasn’t lost any of his ability for conjuring great spectacle.

Hobbit features exceptionally sharp, plasticine images the likes of which we might never have seen on a movie screen before, but which do resemble what we see all the time on our HD television screens, whether it’s Sunday Night Football, Dancing With the Stars, or a game of Grand Theft Auto. (Indeed, most TVs now have a menu setting that can, if you so desire, lend this look to everything you watch—a setting appropriately christened by some gearheads as the “soap opera effect.”) Whereas video-shot “films” have labored for years to approximate the look of celluloid, Jackson goes whole hog in the opposite direction, the idea being that this acute video quality comes closer to the way the human eye perceives reality. Fair enough, but the reality Jackson conjures isn’t quite the one he intends: Instead of feeling like we’ve been transported to Middle-earth, it’s as if we’ve dropped in on Jackson’s New Zealand set, trapped in an endless “making of” documentary, waiting for the real movie to start. For the record, I returned to see The Hobbit a second time, at 24 frames, and found it more aesthetically pleasing but no more dramatically engaging. 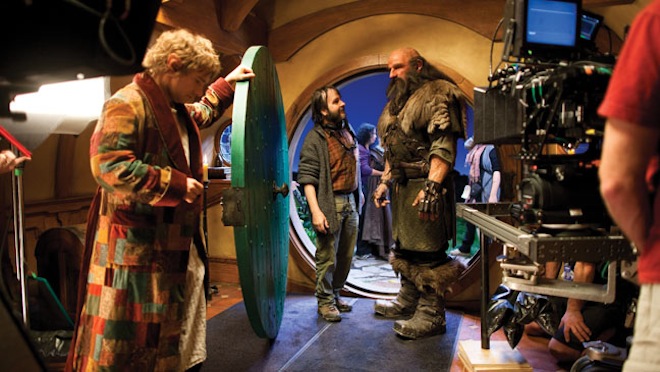 48 frames per second is, as they say, something else. And you can take that both ways. On the one hand, the crispness of detail is almost overwhelming, whether you’re noticing the seam down the back of Gandalf’s hat, or repulsed by the scabby goitre dangling from the Great Goblin’s (Barry Humphries) hideously distended face. On the other, there’s something about the lack of grain and motion blur that oddly makes the movie feel less epic — it’s so immediate and intimate that the distance between seat and screen is all but removed. This may make you feel more thrillingly part of the action, or it may diminish the spectacle and unflatteringly highlight the film’s more set-bound nature.

The intention is to make the digital special effects and swoopy landscape shots look smoother, which they do. The unintended side effect is that the extra visual detail gives the entire film a sickly sheen of fakeness: the props look embarrassingly proppy and the rubber noses look a great deal more rubbery than nosey. I was reminded of the BBC’s 1988 production of The Lion, the Witch and the Wardrobe, and not in a good way.

The Hobbit‘s most startling innovation — shooting at 48fps — is also the most challenging. Filmgoers have been trained for almost a century to watch movies at 24fps. Doubling the rate keeps the image from blurring when the camera moves, which is ideal for Jackson’s action sequences but disorienting in the more static interior scenes, where the scenery upstages the characters. The clarity of the image is sometimes magical, occasionally migraine-inducing. (Mike Ryan of The Huffington Post wrote that “the picture is so clear that in one scene I could see Ian McKellen’s contact lenses.”) At first, in the Smaug battle, I thought I was watching a video game: pellucid pictures of indistinct creatures. After a while my eyes adjusted, as to a new pair of glasses, but it’s still like watching a very expensively mounted live TV show on the world’s largest home-TV screen.

[48p] gives an incredibly clear picture. Which is part of the problem. Because, as it turns out, it’s possible for an image to look so clear that it no longer looks real. Or so real that it takes you out of the film. As in: that film set looks like … a film set. Put it this way: the picture is so clear that in one scene I could see Ian McKellen’s contact lenses. I won’t claim to be a Tolkien expert, but I am pretty sure Acuvue does not exist in Middle Earth. To the extent that I simply wanted to watch a movie and be immersed in another world, it was distracting… if you’re just a fan of the Lord of the Rings trilogy and you want to watch The Hobbitwithout any distractions, see it in 24 FPS.

How nice it would be to weigh in on Peter Jackson’s The Hobbit without having to lament its newfangled double-speed 3-D 48-frames-per-second projection rate, which must be seen to be disbelieved. The immediacy of the ­actors is startling, but the background is weirdly foreshortened, the fakeness of the sets and makeup an endless distraction. Staginess does nothing for a ­fantasy-film epic. The dislocation caused me to miss great gobs of exposition in the first half-hour, which is all exposition, the grandeur of the Lord of the Rings trilogy having been replaced by something that resembles tatty summer-stock theater.

The film is visually ambitious, as Jackson would be the first to tell you, although it doesn’t improve on 3D. (And there are some occasional, distracting deep-focus issues; really, 3-D can make you dizzy enough without that.) The screen and the story are crowded with picture-book colored creatures.

The above opinions were taken at random from the first page of reviews for The Hobbit at Rotten Tomatoes.