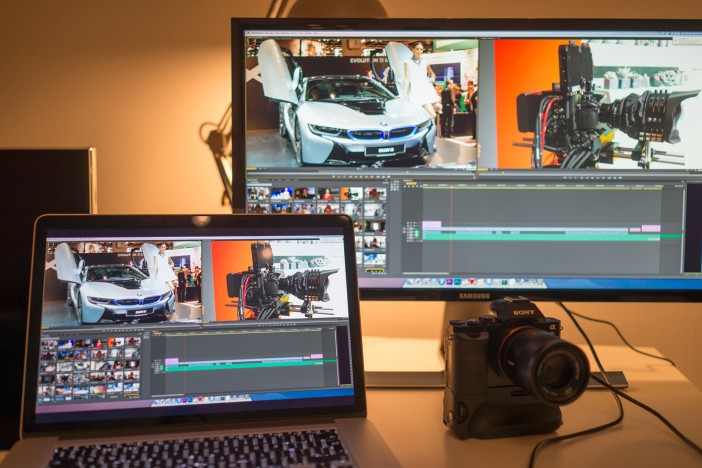 Ultra HD (3840 x 2160) has arrived on your desktop and it is cheap. This screen is like having a 28″ Retina display. For filmmakers and photographers has the time come to finally go 4K?

With every passing day I become more convinced 4K is for me. Creatively it is great. On an image quality basis it is a winner. In terms of outright practicality, here this monitor is also a winner. The U28 is a video editor’s dream with the amount of real-estate if offers.

Going back to even my iMac 27″ 2.5K display after using the Ultra HD U28 it strikes me how low-res and cramped everything looks on it. I am seriously considering the possibility of selling it and replacing it with the Samsung full time plugged into my Macbook Pro Retina 15″. It’s also a great match for the Mac Pro or a high end PC.

My Macbook Pro Retina 15″ has a near-3K resolution LCD and scaling blows stuff up to make it look more like a 1080p laptop display. Without the OS-X scaling activated on my MacBook obviously viewing text and icons at 1:1 on that size of screen at that level of resolution is a struggle. 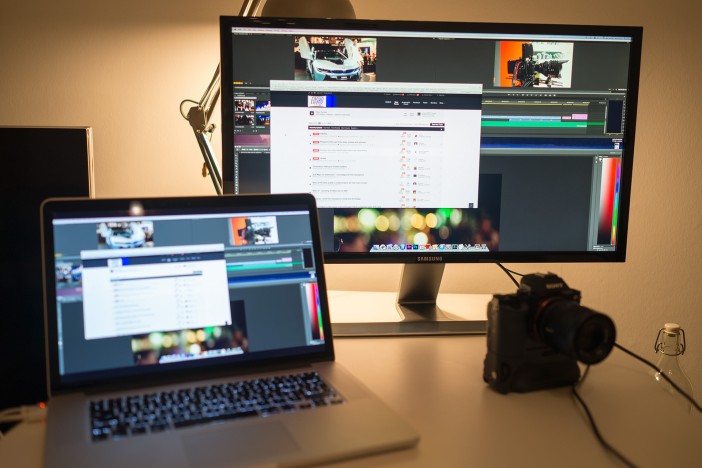 First the price. When the sales guy told me it was 499 euros my jaw fell on the floor. No, that’s an understatement. It plummeted off my head and down to the ground with a violent flourish rarely seen outside Game of Thrones. The US price is $599 and you can find here on eBay

in the US from various retailers, brand new. B&H are backordered to November at time of writing.

4K TVs can now be had in my neck of the woods for a little over 1000 euros for a 55″ display which is tempting enough but almost right to this day manufacturers had only been selling 4K monitors of the 20″-30″ flavour as professional 4K solutions running into the thousands of dollars. Now here is a 4K 28″ monitor for $599 at a high street shop. It is truly astonishing how fast 4K for the consumer has become cheap and mainstream. Panasonic with their camera range and now Samsung with their NX1 camera, monitors and TVs.

Nikon are now considering making their future DSLRs to do 4K “just to compete” but Panasonic GH4 users have been enjoying the benefits of 4K before there was even an affordable big brand display to watch the material on. With the U28 Samsung has delivered that now. So is this the perfect display to watch your GH4 footage on? Let’s find out… 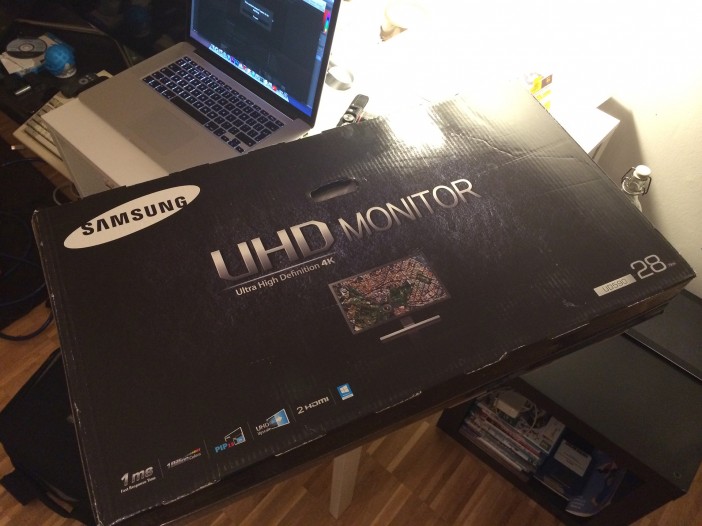 Compromises for the breakthrough pricing

There are two main aspects that make the U28 so affordable. One is the build quality of the frame. It is a rather plastic affair. The stand however is very nicely styled and metal. Overall the screen does not look as premium as an Apple Cinema Display obviously, but it’s far from bad and perfectly acceptable to look at on your desk alongside more high end stuff.

The panel is a TN type, not the better IPS used in some similarly priced 2K displays and more expensive Apple products, like the iMac 27″ and MacBook Pro Retinas. This means colour accuracy and viewing angles don’t match that of a high end 2.5K IPS display in the region of $1000, but viewing the screen head-on I find image quality to be excellent.

You were expecting more? I can’t think of any. Those two points above are essentially the main trade offs in making this price possible.

The U28 has an Ultra HD 4K display port and two Ultra HD 4K HDMI connections. It accepts the 3840 x 2160 4K output of the Sony A7S and through this I got my first glimpse of what the image is like in Ultra HD 4K mode. One word… mind-blowing. I want that external recorder so badly now.

My A7S output a Ultra HD 3840 x 2160 in native 25p to the display with absolutely no issues. It bodes very well for capture with the Atomos Shogun.

The display port on the U28 also gladly accepts an Ultra HD 3840 x 2160 60hz signal from my Macbook Pro Retina 15″ without any set-up work at all. This just requires OS X 10.9.3 or later and a Thunderbolt to display port cable. 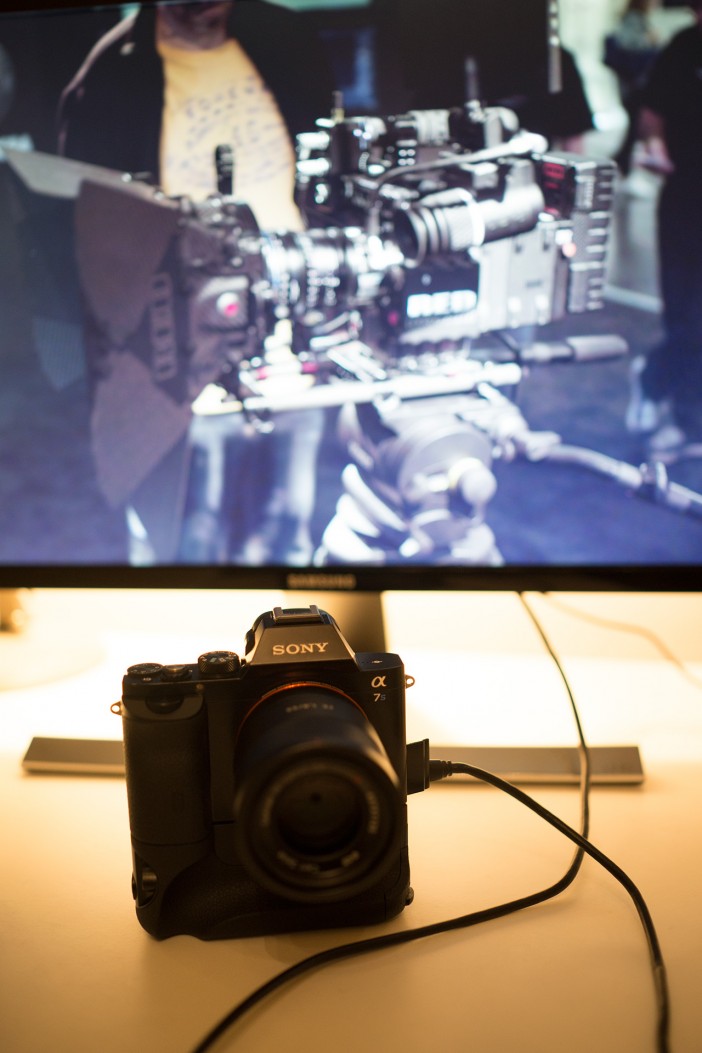 The display is extremely revealing when it comes to watching 4K or Ultra HD footage on it. So much so I might have to go back and refine some of my reviews of 4K cameras. In particularly you see the grain structure very clearly with a noisy image. You also see the loss of detail with heavy noise reduction or compression quite dramatically. Every little imperfection from the lens or camera is there front and centre with no scaling to assist in hiding it under the rug.

It’s going to be very helpful for my reviews to have this kind of display to watch footage on as it’s ultra revealing!

The user interface / OSD of the U28 is slow and a little awkward, operated all from a single joystick at the back of the screen. But it’s rarely required. Here you can set colour temperature, gamma, activate or deactivate ‘Magic’ Samsung features… Yeah – deactivate usually.

Is it good for ‘normal’ stuff?

One of the things I don’t like about OS X is how it leaves various windows and panels cluttered around your screen, one on top of the other.

I don’t like that when I’m reading stuff in a web browser, I need to minimise everything else to stop it distracting me.

The 4K display of the U28 seems to give everything room to breathe.

I find myself not really minding about that little text document open alongside my web browser and a cluster of icons on my desktop.

I can space out multiple windows in aches of land. It’s like coming home one day and finding your garden has quadrupled in size. Carefully arranging your tiny chairs and flower pots suddenly takes on less urgency.

Yes icons and text are small when working in native 4K from a Windows or Mac on this display but they are also extremely crisp and legible meaning your eyes can still pick out them out with the accuracy of an eagle from the sky. I have not once found myself leaning in close and squinting. This I did do when setting the screen space to the highest setting on my Macbook Pro Retina 13″, the reason I sold it and got a 15″.

28″ here makes a big difference to the ‘Retina’ experience.

For those with less perfect near-sighted vision, OS X has a handy feature whereby it scales up all elements on screen (like text, icons, toolbars and images) while maintaining the crisp native 4K res of the display you’re using. Thus here the U28 4K monitor is capable of acting like a giant Apple retina display. This feature of OS X solves one of the big potential issues I think customers will have with this display – in effect they get to choose their resolution, whilst keeping the crisp, detailed advantages of a 4K display when it comes to image quality. It’s a win-win situation all round.

Viewing distances the key to a happy 4K experience

Thanks to Sony at Pinewood Studios I have seen A7S 4K and 1080p material on a cinema screen and was struck by the lack of significant difference, apart from with wide angle landscapes or panoramic aerial shots. Here on a small desktop monitor I am struck by the enormous difference it makes to the viewing experience. WHAT IS GOING ON HERE!?

For me 4K finds its natural home on the desk or in the living room where viewing distances are shorter than in the cinema. For sitting close to a projection from your 4K home cinema projector you are going to love it. For a computer screen you are also going to love 4K too. As a gamer with a top spec PC able to play games at full detail in 4K, your eyes are going to be having a veritable amusement park ride.

You can really see everything much more clearly. That it is 28″ and much smaller than a TV is a moot point. 28″ for me is the sweet spot for a desktop monitor. Any larger and it is too much work for your eyes to track around the screen.

If like me you struggle to tell the difference half the time between 1080p and 4K at long viewing distances, then the U28 is perhaps the eye-opener you need to become a believer in 4K. 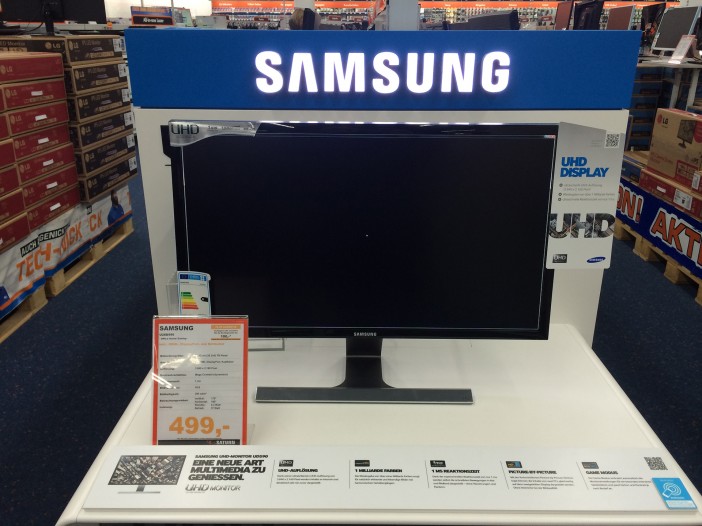 My short time with this display has left me more than satisfied, it has left me wanting more 4K. More cameras, more computers, more TVs. Once you see it, it is hard to go back to other displays as they feel cramped or softer.

It has also made me realise that you can’t properly judge the image quality of 4K cameras unless you have a 4K display to go with it. This is the most demanding and exacting display I have ever owned when it comes to viewing photos and videos. Looking at standard Canon or Nikon DSLR video material on this screen really shows them up in a harsh spotlight. Owners will be in for a bit of a shock. The reason is simple. This screen demands more than 4x the detail than pixel-binning 1080p DSLRs are able to give us. It is my belief Canon and Nikon have miscalculated in thinking 4K wasn’t needed yet or is ‘too much’. It is in the era of Retina display and such close viewing distances it undoubtably is needed and unfortunately there appears to be a real lack of understanding of the computer world and the associated viewing habits of their customers. Once you go 4K on the display side, you will realise your Canon DSLR just isn’t up to it and that the upgrade path starts at $10,000 with the 1D C. Very disturbing. Not everybody is plugging their DSLR into a full HD TV and sitting at the other end of a room to watch. Most people are watching stuff on laptops, monitors and Retina display tablets and here, in 2014, you notice the advantage of 4K big-time.

Practically the screen is also very useful. You gain enormous real-estate from editing on it or working with stills in Photoshop. You no longer have to obscure other open apps or a TV feed on the screen either, when using a professional app like Premiere which demands a lot of screen real-estate for the UI. The screen gives all the elements of an operating system (Mac or PC) more room to breathe especially when you have a lot of windows open at once.

Sharpness and detail levels are exactly what you want from a LCD computer monitor. Exacting. The U28D590 is ideal for graphic design, Photoshop work, video editing, pixel peeping of camera footage and complex specialist software (such as CAD). If you’re working with 1080p material the 4K display is still an advantage. You can put two Premiere monitors side by side on the one screen, both at native 1080p each with no scaling or drop in detail required to fit them in.

The cons are that viewing angles and backlight uniformity of this TN-type panel do not match the very best IPS displays like the Apple Cinema Display but nor should this be expected on one of the first 4K monitors available for $599. A TN panel is what makes that price even possible. If you are viewing the screen head-on and not from above standing up or sat far to one side, you won’t quibble over colour and contrast on this display. It’s a wonderful looking image delivered by it overall and 4K is future proof.