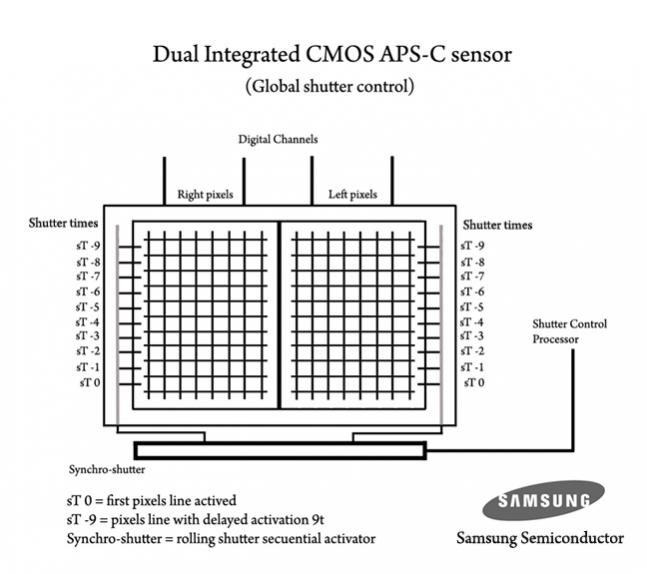 Samsung have apparently come up a global shutter design whereby two separate sensors work together with timed rows producing an electronic shutter that creates an image free of skew.

Whilst it’s good to bare in mind that these diagrams may be fakes, they could as easily have been leaked from a patent, a semiconductors presentation at an industry conference or from a suppliers meeting. K-Rumors, the Pentax and Samsung news website which broke the story does not offer an explanation of where the source got the drawings.

The sensor is a large 12 megapixel APS-C sized CMOS.

To me, the diagrams don’t make sense.

I can’t work out whether this design represents a true global shutter or a work-around involving a synchronisation method for a standard row-by-row readout of the sensor. I also do not understand why it has to be divided into separate left and right channels, seemingly with two separate sensors. Current sensors are read vertically from top to bottom. Maybe Samsung are exposing continuously from left to right and at the same time performing timing adjustments? 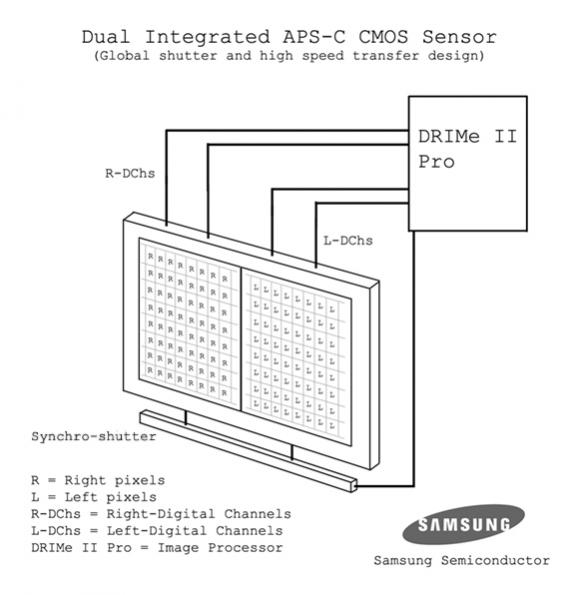 Here is my interpretation of the diagram –

Row sT0 is the first to be activated (exposed), by that I assume it has an electronic shutter of it’s own. I also think this row would be the last to be read and that the ‘dual sensors’ left & right will fire at the same time and offer multiple exposures right up to the point of the last row to be exposed.

By contrast row 9’s shutter is delayed by a certain amount of time but I think that’s the first to be output. So the diagram seems to be saying that the exposure is offset by the read-out timing and the correct row exposures from each sensor are chosen to be output.

But the problem here is that I simply cannot work out how you can achieve a global shutter by exposing each line at a different time with their own electronic shutter, regardless of it’s ‘dual sensor’ design.

A mechanical shutter allows the whole chip to be exposed at once and then read-off line by line, a process which results in a frame rate too slow for video. Current HDSLR continuous shooting rates in stills mode are determined by how fast this read-out can be performed per second. So on average, just 7fps.

Perhaps someone else has an interpretation of the diagram which makes sense?

For now, I’d put this one down to make-believe.