So I'm kitting myself out, beginner style... 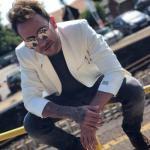