Its funny that everyone screams "workflow" problems from the get-go.  Not too long ago we were capturing everything in real-time from tape... remember??  My film-school experience was that we shot on

[media]http://vimeo.com/66574661[/media] Download the 3K Vimeo file and playback on a 2.5K or 4K display for best results Download a pack of DNG frames from the original raw 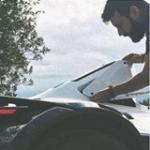 If you can't see the difference, then great for you!