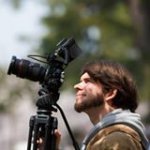 So Andrew, you watch much Ghost in the Shell  :)

I don't use the multiplier on the F-stop when it comes to speaking about low light ability. F1.8 is F1.8! And it is easier just to take it as given that with a smaller sensor you won't get as shallow

Straight from the card into Premiere and Film Convert. No need for anything in between, no LUT.