Ideas on how to record proper documentary audio on the GH4? 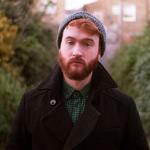